Florian started his first free software project in 2001 and has been active in the open source community ever since. In 2005 he started the collectd project and is still one of the project maintainers. His interests lie mainly with low-level backends and infrastructure services, though he has contributed to various window managers over the years. In his day job, he is a Site Reliability Engineer at Google.

For more information on Florian and his presentation, see here.

You can follow him as @flocto and don’t forget to mention #lca2015. 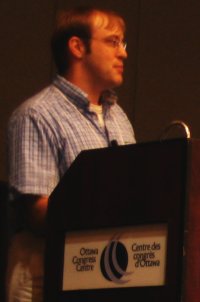 Ian Romanick is the software architect for Intel's open-source OpenGL driver, and is currently Intel’s representative to the Khronos Board. Since 2001 he has been dedicated to OpenGL on Linux. He has been doing graphics programming for 23 years, having released his first Amiga demo in 1991. Ian holds a Bachelors Degree in Computer Science from Portland State University, and is just about finished with a Masters program there. He previoulsy taught graphics programming in the Visual and Game Programming department at the Art Institute of Portland for 7 years.

For more information on Ian and his presentation, see here.

You can follow him as @IanRomanick and don’t forget to mention #lca2015.

Jean-Baptiste Kempf is the president of the VideoLAN non-profit organization and one of the lead developers of the open source VLC media player.

Jean-Baptiste is a 31-year old French engineer and has been part of the VideoLAN community since 2005. Since then, Jean-Baptiste has worked or lead most VideoLAN related projects, including VLC for desktop, the relicensing of libVLC, the ports to mobile operating systems, and various multimedia libraries like libdvdcss or libbluray.

Jean-Baptiste has also been working in various video-related startups, and founded VideoLabs, a company focusing on open source multimedia technologies.Jean-Baptiste is the president of the VideoLAN non-profit organization and one of the lead developers of the open source VLC media player.

For more information on Jean-Baptiste and his presentation, see here.